During an interview, a prospective employer asks the interviewee if they would mind volunteering their time to see if their employment would be a good fit. This volunteer time would be unpaid and to determine employment.

A new hire is told that the job requires a commitment of 6 days a week sometimes 7 days with no overtime. If they are unhappy with it, they can find employment elsewhere.

An employer tells his employee that payroll was not processed on time therefore the paychecks will be available one day after payroll.

An employer requires his employees to meet daily at a designated place to get instructions on the days work and turn in time cards but actual start time of the job does not occur until they are at the jobsite. (sometimes job site can be an additional 90 minutes of drive time)

An employer promises an employee a certain dollar raise after a probationary period. After that period, the employer renigs and offers a lower compensation; stating that “it wasn’t in the budget.”

The aforementioned scenarios are actual events that I consider FUCKING BULLSHIT.


Someone needs to be an advocate for the unemployed. Employers are preying on unemployed individuals and taking advantage of them because we all know the economy sucks and finding a decent job is like getting a negative pregnancy test after that one crazy night which you swore you never do except with that one guy at that one place… but I digress. It’s hard enough as it is trying to get a job and competing with millions of other candidates. No one wants to be the “whistle blower”.  Everyone wants to be part of the “Team”. But when people are being taken advantage of, someone needs to be an advocate for them with out someone feeling like they are being a snitch. It’s not fair to not be compensated for your time. It’s not fair to have to beg for your paycheck or to not get paid on the day that is designated as payday. It’s not fair to be the victim of sexism. There are rules and regulations, laws and provisions that are in effect to “protect” the employed. But if no one follows them, and everyone is afraid to say anything for fear of losing their job, what good is it? 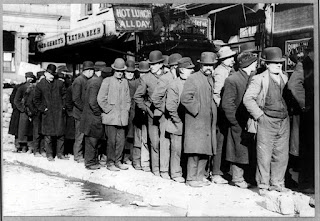