I'm the type of person where something will happen and then three days later I'll come up with the perfect comeback or response. I use this example to segue into the profile of delayed responders. I'm that girl. You might do something to piss me off but it takes me three days to figure out I'm pissed off about it. Anyways, I think a couple of posts ago I wrote about this awesome used bookstore I found in Roseville. It didn't dawn upon me until recently that maybe the Hitler photos displayed prominently in the windows could indicate an anti-Semitic philosophy. ( I know.... Captain Obvious, right?) Then I start racking my brain and I remember going to a very well known tattoo shop here in town (for my daughter's nose piercing) and seeing another Hitler photo on the back of their promotional flyers/business cards. So I'm thinking ....hmmmm, racist much? Here's the photo: 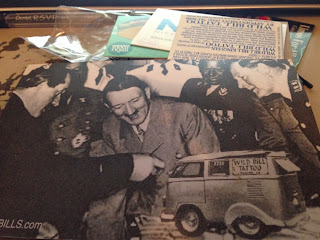 So the blackened face of the General in the back ( I don't know if he's a General or not...) and the laughing face of Hitler, as if Hitler was just some swell guy....

The other day my daughter was walking to the local store and a truck pulling into our neighborhood screamed "Nigger!" at her.

What year do we live in? Am I being too sensitive? This stuff really bothers me. I always tout about how progressive Roseville is but I feel like the wool has been pulled over my eyes (once again). I've always hated racism in all its ugly forms.

I know I will never step foot into those two business establishments again.