"Injustice anywhere is a threat to justice everywhere. We are caught in an inescapable network of mutuality, tied in a single garment of destiny. Whatever affects one directly, affects all indirectly."
– Dr. Martin Luther King

Today the Mayor of Sacramento, Mayor Darrell Steinberg and Sacramento Police Chief Daniel Hahn knelt in solidarity with protesters at the Oak Park Community Center who gathered in solidarity to voice their dissent and disgust at the senseless death of George Floyd at the hands of Minneapolis law enforcement. Many applauded the kneeling gesture, noting its symbolism during this difficult time. While other police chiefs around the country are seen hugging, kneeling, and shaking hands with protestors, the media is quick to document these counterfeit gestures as moments of understanding and unification. However, intention without action has been the modus operandi of all in power for keeping the status quo. George Floyd’s murder has erupted riots that have inflicted cities across America and have exposed to the rest of the world the deep seeded centuries old wound that America has tried to keep hidden. Systemic racism is rampant in law enforcement. The “brotherhood” of those who serve in blue have a code of silence when one of their own commits egregious crimes such as murder. As we have all heard time and time again, silence is complicity. Society as a whole has a moral obligation to reach beyond its circle of influence and comfort zone to be antiracist. As Angela Davis, American Political Activist, once said, “In a racist society, it is not enough to be non-racist, we must be antiracist.” The symbolic act of kneeling in alliance with those who are oppressed means naught if systematic institutional change does not transpire.  Examples of issues that need to be addressed are use of force policies within law enforcement union contracts, police accountability and transparency, the introduction of an independent investigation unit and prosecutors who do not have incentive to protect the police officers involved. I appreciate the photo op, I appreciate the gesture, but all of that means absolutely nothing if there is no profound reform to address police brutality in the American justice system. 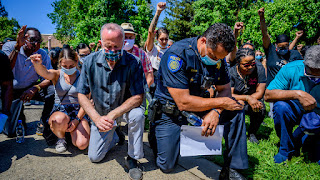